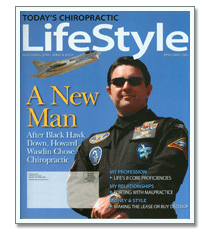 Former Navy SEAL sniper for SEAL Team Six Dr. Howard Wasdin has experienced it all–he’s been shot at, he’s repelled off helicopters, he fought in the 1993 ‘Black Hawk Down’, and he was part of the U.S. led effort to oust Saddam Hussein from Kuwait in 1991.   It’s not everyday that one becomes a Navy Seal, but one that’s also received a Silver Star and a Purple Heart–it really had to take something big to make Dr. Wasdin pour all his efforts into once he retired.  After finding great satisfaction in being an elite Navy Seal, he found his calling being a chiropractor and changing lives one patient at a time.  He went back to school and used his laser-sharp focus and dedication to graduate Cum Laude from Chiropractic school–which requires the same number of credit hours as most Medical Schools.

Dr. Wasdin recently published a book, ‘SEAL Team Six: Memoirs of an Elite Navy SEAL Sniper’, and has been featured and interviewed in numerous media outlets, offering a rare glimpse into a life rarely lived by most Americans.  Here are some questions that TIME magazine posed to him.

You’re engaged in stressful missions almost constantly as part of Seal Team 6.  Do you need a particular attitude in order to succeed?

I can take just about anyone and make them physically strong.  A lot of people showed up at [training] who were much more physically capable than I was, athletes in phenomenal shape, and they were the first to quit.  Mental toughness is a must to even make it through training, much less through combat.

What’s the most mentally challenging part?

Getting ready, gearing up and then having to stage down.  That’s the most stressful part.

Do you still maintain the skills you learned in the Seals?

At Christmas I went to the range and shot for the first time in 10 years–all of my bullet [holes] you could cover with a quarter.  Talk about muscle memory.

John Wilkens of the San Diego Union-Tribune also got a chance to sit down with Dr. Wasdin, and they got to reminesce over his SEAL days.

What’s the most misunderstood thing about Navy SEALs?

People think they’re brainwashed, windup assassins. They’re not. The SEALs are the elite, and SEAL Team Six is the elite of the elite, but they’re human beings. I was doing an interview with CNN earlier this week, on a balcony overlooking Ground Zero in New York, and it was very emotional for me. I did not realize it would have that kind of effect on me. I had a lump in my throat. I don’t think I would have had a lump in my throat if I was an inhuman, coldblooded killer.

Who does this kind of work?

They’re just the good-old boys next door. One common bond is they really love their country. They have the mental toughness to endure the training and the drive to become one of the best warriors in the world.

What I noticed was a dramatic increase in close-quarters combat, which is what the bin Laden mission was. You train for it day in and day out, in all kinds of weather, with all kinds of contingencies.

Why did you write this book?

Believe it or not, it’s an overcoming adversity book. Hey, you can have a messed-up childhood and overcome it, still serve your country. You can find out you are no longer an asset to your government (because of his injuries), you’re a liability, and you can get over that, too, and still make something of your life.

I started writing it 16 years ago and had to wait for the CIA to declassify everything. The fact that it’s coming out now is just coincidence. It has nothing to do with the bin Laden mission. I kind of feel bad about that. Those guys did all the work and I’m the one talking. My hat’s off to them.