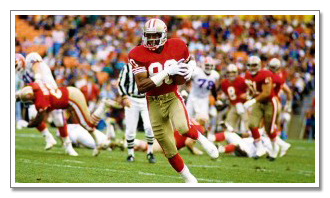 Which famous athlete said “Chiropractic care has been instrumental in my life, both on and off the field, and I am excited to share this with the American public”?  It was none other than Jerry Rice, who not only became the most prolific wide receiver in NFL history, but also captivated American audiences with his performances on Dancing With the Stars.

Rice has a hold on multiple NFL playoff and Super Bowl records. He played in eight conference championships and four Super Bowls. He earned three Super Bowl rings with the 49ers and was named the Most Valuable Player of San Francisco’s Super Bowl XXIII win over the Cincinnati Bengals.

A study in the Journal of Vertebral Subluxation Research in 1997 revealed that chiropractic care increases an athlete’s capillary count–an increase in blood flow and more oxygen to the body.

Thinking back to his football career, Rice credits his success on the field largely in part to chiropractic care. “If I had everything in alignment, I knew I could play my best football,” said Rice at a recent Chiropractic Seminar.   His training routine included twice-weekly chiropractic adjustments which helped his body recover from all the hard hits and countless tackles.   Because Rice firmly believed in the benefits of chiropractic, his teammates began to favor this type of healthcare over the medications that trainers traditionally give. “I wanted to set the standard within football,” said Rice. “I knew if chiropractic helped me put up outstanding numbers, it could help my teammates do the same.”