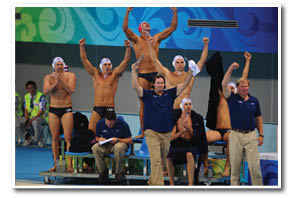 Dr. Terry Shroeder is the USA’s only four time Olympian in the sport of water polo.  He was named Team Captain in 1981, and his leadership helped the team to consecutive silver medals in 1984 and 1988.  At the Closing Ceremonies of the 1988 Olympics in Seoul, Korea, he was selected to carry the Amercan flag for the USA delegation.    After a brief two-year retirement,  Dr. Shroeder decided to return to the pool in 1990 to train for the 1992 Olympic Games in Barcelona.  He had an immediate impact and Team USA won the World Cup for the first time ever in 1991.  Team USA finished fourth at the Olympic Games in Barcelona.  In 1981 and 1985 Dr. Shroeder was named the best water polo player in the world, and was selected as the model for the Olympic torso statue, which currently stands at the entrance of the Los Angeles Memorial Coliseum.

As the Head Coach at the 2008 Beijing Olympics, the USA Men’s Water Polo squad became one of the amazing stories of the Games.  The USA squad made a remarkable run in Beijing with upset victories over Italy, Croatia, Germany and Serbia to forge their way into championship game.  Team USA fell to Hungary 14-10 in the gold medal game, but gained international recognition in returining to the podium for the first time in 20 years.

In addition to currently being the Head Coach of the USA Men’s Olympic Water Polo Team, Dr. Shroeder is also a practicing Chiropractor in Westlake Village, California.  Chronicling his childhood in Santa Barbara, a Sports Illustrated article quotes Dr. Schroeder praising chiropractic treatment: “I grew up seeing people arrive at my dad’s office in pain and then watching them come out with a smile. I’ve never taken an aspirin or had a shot. I’ve always had chiropractic care as primary care, and I believe I’m in balance, that my immune system is better for it. I’m not saying there’s no place for surgery, but the body will take care of itself if you let it.” His success in the healthcare field is also evident in several books he co-authored wtih Dr. Robert Watkins, M.D, and Olympic swimmer John Naber.  At Georgia Clinic of Chiropractic, we have seen first hand how chiropractic can make a significant impact on an athlete’s performance and injury recovery.  Dr. Shroeder has experienced it himself, first as an Olympian and then as an Olympic Coach, just how important chiropractic care really is to an athlete’s regimen.

A writer for The American Chiropractor Magazine sat down with Dr. Shroeder for an insightful interview about life as an in-demand chiropractor and a heralded Olympian. 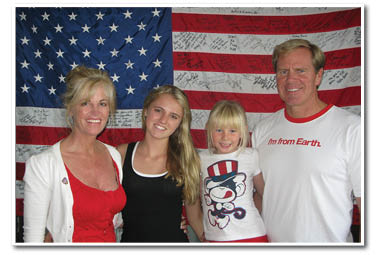 What inspired you to become a chiropractor?

My dad was a chiropractor and he delivered all three of his children.  Chiropractic was a way of life in our family.  When we were sick, we knew we need to be adjusted.  My inspiration to become a chiropractor really came from watching my Dad at his office.  I would sit in the waiting room and watch as patients came in, many times in such pain that they had to be helped into the office.  After spending 15 minutes or so with my Dad behind a closed door, they would often times come out of the room laughing and joking with my Dad.  We  were amazed and convinced that my Dad was some kind of miracle man.  I made the decision early that I wanted to become a chiropractor and help others like my Dad did.  My brother, Lance and sister, Tammy, also became chiropractors.

How has your experience as a chiropractor impacted your coaching?

I have learned some great lessons as chiropractor that I have been able to carry over to my coaching.  First of all, I have learned to be in the moment.  Each adjustment that I give is the most important adjustment of the day.  I try to carry that with me with all that I do.  When I am on the pool deck coaching, I need to be there in the moment 100% with my athletes.

How do you see the chances of the U.S. in the upcoming Olympics?

We are in the hunt to win another medal and, this time, we are focused on winning the gold.  There are 10 teams in the world that are all pretty close to each other.  We are in the middle of that pack.  Currently, we are ranked fourth, which is where we have placed in the 2009 World Championships and the 2010 World Cup.

Do you have any amazing athlete recovery story?

I feel like chiropractic care helped me to become the only four time American Olympian in the sport of water polo.  I was badly injured in a car accident in 1987 and doctors wanted to perform surgery on my right shoulder.  With some amazing chiropractic care, I recovered fully wihout surgery and was able to play in two more Olympic Games after that (1988, 1992).  Besides that, I see the miracle of chiropractic every day in our office with young athletes that tell me how much they improved on their time or how well they felt after an adjustment.   There is a small margin between winning and losing at the Olympic Games and each one of our athletes came to realize the ability of chiroopractic to find tune the body and help them reach their athletic potential.