Prescription Drugs: One Death Every 24 Minutes 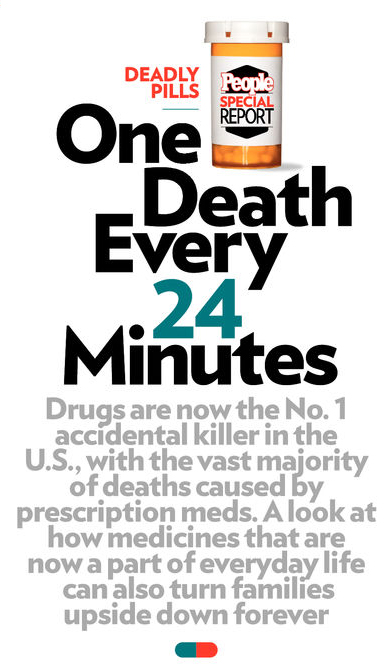 Earlier this year People Magazine brought to light an epidemic that has been sweeping this country, but is often kept under wraps for a number of reasons, among them the lack of substantial newsmedia coverage, as well as the publicity powerhouses of pharmaceutical companies.  For instance, many would be surprised to know that there has been a 90% increase in poisoning deaths between 1999 and 2008, many of them due to prescription drugs.  And a far scarier statistic:  there is an average of 61 pharmaceutical drug deaths every single day in the United States, according to the Centers for Disease Control.

These statistics also bring to light the importance of a healthcare system that needs to look at the bigger picture.  A healthcare system that integrates drug-free treatments, such as chiropractic, would far better serve its patients then soley relying on pharmaceutical drugs to fix every health condition imaginable.

Many of our patients at Georgia Clinic of Chiropractic (Augusta, GA) achieve success two-fold:  1) improvement in their symptoms, as well as 2) reduction/elimination in the need to rely on pharmaceutical drugs.  While chiropractic should not be viewed as a “cure-all”, the mounting evidence proves that pursuing safer alternatives such as chiropractic first is the more logical choice.

Below is an excerpt of the special report from People Magazine:

Drugs Are Now the No. 1 Accidental Killer in the U.S., with the Vast Majority of Deaths Caused by Prescription Meds. A Look at How Medicines That Are Now a Part of Everyday Life Can Also Turn Families Upside Down Forever

The statistics are staggering, the medicines powerful and highly addictive: This year more Americans will die of drug overdoses than in any other type of accident-including car crashes. In most cases, those deaths are caused by pills in many people’s medicine cabinets given to them by trusted doctors, left over from routine surgeries or prescribed to manage chronic conditions. “Prescription drug overdoses are a serious nationwide problem,” says Dr. Leonard Paulozzi of the C.D.C.’s National Center for Injury Prevention and Control, “for which we haven’t yet found a solution.”

Since 1990, when the number of opioid prescriptions began to rise, such drugs have become easier to get ahold of: From 1999 to 2008 painkiller sales rose 300 percent. And there have been other contributing factors. In states like hard-hit Florida, for example, the proliferation of “pill mills”-rogue pain clinics staffed by doctors trading prescriptions for cash—has torn towns apart. And in some places “pharm parties,” where teens swap painkillers obtained legally or otherwise, have led to dozens of deaths.

While many of the most prominent faces of America’s prescription drug epidemic have been famous ones-Heath Ledger, Brittany Murphy, Michael Jackson-they comprise but the tiniest fraction of victims.

On a sweltering morning in August 2011, a few days before he died, Harry Cohen noticed the freshman girl walking in front of him with her backpack unzipped, her things about to go flying. The senior football captain at Walter M. Williams High School in Burlington, N.C., reached out to fix it-a tiny gesture, the girl later told his parents, that had a huge impact. “He’s the big senior star on campus, and he walked up and helped her,” says his stepdad, Richard Kaffenberger, 44. “Through quiet acts of kindness, he touched people’s lives.”

The handsome athlete who aspired to be a sports-medicine doctor was gearing up for his final high school season when, on Aug. 27, 2011, after one of the best games of his life, he reached into his grandmother’s medicine cabinet for something to soothe his aches and pains. Not one to complain after taking hard hits and, according to his parents, too focused on his college football dreams to experiment with drugs or alcohol, during a visit to his grandmother’s house that night, he took two methadone pills prescribed for her fibromyalgia-something his parents say he’d never done before. While the two-pill dosage was fine for his grandma, it caused Harry, a wiry 150 lbs., to slip into a coma. Memories of the next day still haunt his mom’s dreams. “A vision I couldn’t get out of my head was Richard and I having to give him CPR,” says Jennifer Kaffenberger, 39, breaking up. “I want to remember the good, not the bad.”

Still reeling, the Kaffenbergers, as well as Harry’s biological dad, Harold Cohen, 39, and his five half siblings, including twins Carter and Cana, 5, “miss everything,” says Jennifer. “Cana used to sit on Harry’s back when he did his AP calculus.” Adds Richard: “The other day Carter said, ‘I want Harry back.’”

Harry’s family believes that if there’s anything to be taken from their tragedy, it’s the importance of telling kids the dangers of prescription drugs. “Harry’s life couldn’t be saved,” says Jennifer. “But maybe this could save another set of parents from losing their child.”

We were trapped,” retired New York City firefighter Jeff Cool remembers of the wall of flame that roared at them during a massive blaze in a Bronx tenement Jan. 23, 2005. As colleagues leaped out windows, his pal Joey DiBernardo Jr. held out a rope. “He said, ‘You have a wife and kids, you go first,’” recalls Cool, who let DiBernardo lower him down. Two firefighters died that night, but thanks to DiBernardo, he and Cool survived. “He allowed me to see my kids grow up,” marvels Cool. “My kids call him Uncle Joey.”

During his own escape, DiBernardo plunged 40 feet, breaking his legs, feet and pelvis and bruising his lungs. For 18 days he lay in a coma; when he woke, depression set in as he struggled with memory loss and excruciating pain.”He said, ‘Dad, I’ve never taken a pill in my life. Now I’m taking 10,’” recalls his father, Joseph Sr., 71. “He hated it.”

But by November 2011 things were looking up. A new girlfriend had been helping him scale back his meds with acupuncture. And the week before he died, he’d planned a romantic trip for them in Pennsylvania. Tragically, on Nov. 22 a friend found DiBernardo, 40, dead in his Long Island home due to an accidental overdose of the pain med Dilaudid and an antidepressant, Celexa. His death could have been prevented, says his dad: “People need to know to be more careful when they take their pills, and doctors need to explain the dangers of combining medications.”

Last year multiple news outlets broke the headlining news that pharmaceutical giant GlaxoSmithKline pled guilty to health fraud–and paid a whopping $3 billion dollars to the United States government for it.  The payment is the largest fraud settlement in U.S. history, and the largest fine ever paid by a drug company.

If you would like to get a second opinion to find out if drug-free treatments with an experienced chiropractor in Augusta GA may be beneficial for you, you can schedule a complimentary consultation right here in Augusta at Georgia Clinic of Chiropractic.  Many of our patients have said they wish they had considered other alternatives sooner.  Our complimentary consultations are an integral part of our patient experience here, and our goal is to make sure that you, not the marketers of the pharmaceutical industry, remains in control of your healthcare.
After taking Prescription Drugs for Years, How Augusta GA native Vickie Finally Got Help: