Vin Diesel to star in Movie about Navy SEAL-turned-Chiropractor 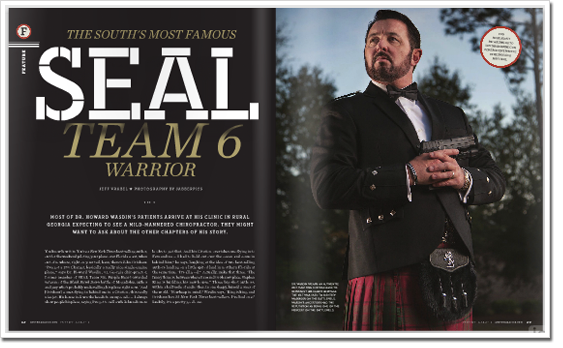 SEAL Team Six is a secret unit tasked with counterterrorism, hostage rescue, and counterinsurgency.  Many have probably heard of Dr. Howard Wasdin from his recent bestseller SEAL Team Six: Memoirs of an Elite Navy SEAL Sniper, where as a member of SEAL Team Six Dr. Wasdin graduated from the most storied and challenging sniper program in the country: The Marine’s Scout Sniper School.  Many may not know however, that this former Navy SEAL who fought in the 1993 ‘Black Hawk Down’ is also a chiropractor.  Dr. Wasdin medically retired from the Navy in 1995 after he was shot three times in a battle. After his military career, he went back to school to earn his Doctor of Chiropractic degree, and now runs a successful practice.

According to The Morton Report, actor Vin Diesel will star in a movie based on Dr. Wasdin’s memoir, which is expected to be pushed for release as soon as is possible.  “While the script is not completed and there’s no release date, sources state the studio working on this sure-to-be-a-blockbuster flick, will push hard to release the film quickly to capitalize on the mass media attention surrounding the SEAL Team Six’s operation in Pakistan” the report stated.  The film is based which details the intense training this strike force undergoes in order to become part of the most elite military group.

Diesel is known for his starring role in The Fast and the Furious, and his latest release, Fast Five, has taken in more than $440 million worldwide.

According to The Daily Mail, Dr. Wasdin describes the aptly-named ‘Hell Week’ as the time when just the toughest make it: the groggy sleep-deprived candidates are expected to run more than 200 miles and pass a test known as Drown Proofing by swimming two lengths of a pool with feet bound together and hands tied behind the back (‘If anybody is going to die, this is the time,’ Wasdin tells himself). Wasdin gets through through ‘Hell Week’ by comparing it favorably with his childhood. By the end he is hallucinating so badly that he attacks a tray table in the canteen, believing it to be a deer.  The grueling selection process of Basic Underwater Demolition/SEAL (BUD/S) is the toughest and longest military training in the world.

With reference to his book, Dr. Wasdin said at a South Carolina Chiropractic Convention: “Anybody that reads it will see it’s about overcoming abuse as a child, overcoming adversity, overcoming abuse as a child, which I won’t go into. But don’t become a statistic, use that as a positive, direct it towards something in your life.”  Dr. Wasdin has certainly exemplified being a positive force, both in his military career and currently as a chiropractor changing lives one patient at a time.