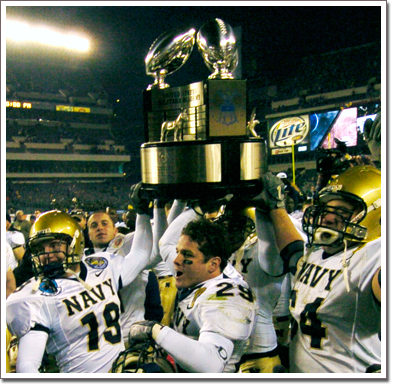 Not too long ago we posted an interview with Dr. Bill Morgan, the chiropractor currently serving at Walter Reed National Military Medical Center (WRNMMC) as well as at several high-level executive care clinics in the Washington, DC region caring for the country’s leaders.

Not coincidentally, Dr. Morgan is also the Navy’s secret weapon, as reported by The American Chiropractor.  How so?  He happens to be the United States Naval Academy Football Team’s official chiropractor, and as long as he has been part of their team, the Navy has never lost going up against the United States Military Academy of West Point.  How significant is their winning streak?  This classic match had almost been even for 50% of the contests over the course of the first 110 years.  However, for the past twelve years, Navy has dominated Army.  Why is that?  The only significant variable that changed twelve years ago was the addition of a chiropractor to the medical staff.  With the addition of their chiropractor, the Naval Academy football team had a leading edge, since West Point’s football team did not have one.

Dr. Morgan has become not only a pleasant but critical member of our sports medicine staff at the US Naval Academy, serving mostly our Division I football team.  Dr. Morgan and his team evaluate and adjust players on Wednesdays, after our live, full-contact practice.  He has been able to adjust misalignments from big hits, and save a player for a Saturday game.  On Saturday, his presence helps kids with their pregame tension in addition to adjusting kids after some big hits during the game.  Dr. Morgan has been a valuable resource, sorting out much of the low back pain that accompanies collision sports, and at the same time preserving our athlete’s carrier aspirations in the military.

This game frequently attracts the president and vice president to attend, as well as the Secretary of the Navy, the Secretary of the Army and the Secretary of Defense.  Whilte the Naval Academy midshipmen may tell you that their triple-option offense and their extreme conditioning programs are their secret weapons, it is well worth noting that the Navy has not lost a contest to the Army since adding a team chiropractor to its staff.  Below is an interview with the legendary Dr. Bill Morgan. 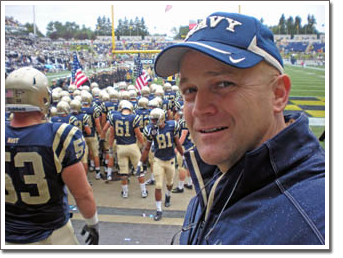 Do you have any amazing athlete recovery stories?

I cannot talk about specific players, but generally, our players bounce back quickly from injury due to superior conditioning and resolve.  They certainly respond quickly to chiropractic care.

I have lots of athlete tenacity stories.  Due top military recruitment standards, our team is inherently lighter, and as a whole, held to higher academic standards than most teams that we face, except for the Army and Air Force service academies.

All members of our team take classes in higher math, thermodynamics, navigation, and engineering, and they all graduate in four years.

Can you tell us about your hospital?

Walter Reed National Military Medical Center is the largest military medical center in the world.  It is home to the longest standing chiropractic clinic in a tertiary care facility in the world.  The chiropractic clinic is currently embedded within the Department of Physical Medicine and Rehabilitation.  Walter Reed is the hub of military medicine in the United States.

Have you always been a die-hard sports fan?

No.  While I have never been a sports fan, I am a fan of the Navy football team and of all the men and women in the service academies.  I am a fan of men and women with character and the ability to be longsuffering in the pursuit of a greater goal, and those who are willing to make sacrifices for others.

What has prepared you the most to care for the athletes of the Naval Academy?

A lifetime of providing chiropractic adjustments to the spine and extremities.  I perform many extremity adjustments.

What is the most memorable even that you can recall in regards to Navy football?

Aside from the awesome football games and meeting so many high-ranking VIPs, I would say the blizzard that we played in, in the 2013 Army-Navy Game in Philadelphia was the most memorable and miserable.  I remember the freezing cold and the snow football, but I what I really recall is the snow-covered adjusting table and the icicles hanging from it.

Dr. Morgan’s personal mission is to be the “hands of a grateful nation.” He adds: “Serving our American heroes is an honor and sacred trust, and should be regarded as a calling, rather than a job, which can be a very rewarding and challenging career for a chiropractor.”

If you would like to find learn more about chiropractors in Augusta GA that specialize in sports injuries, you can schedule a complimentary consultation with Georgia Clinic of Chiropractic.  Many of our athletes have said they wish they had considered other alternatives sooner.  Our complimentary consultations are an important aspect of our patient experience at our clinic.  Additionally, you can also watch videos of our patients and some of Augusta GA’s very own athletes describing their chiropractic experience with us.

For example, Jeremy is basketball player that recently won MVP, but an ankle injury had sidelined him.  He had an important game coming up where college scouts were going be present, but with his injury, playing was not an option.  After our customized treatment addressed his ankle injury, he was able to play the very next day, and received excellent feedback from the scouts present.  You can watch his video at our YouTube Channel: https://www.youtube.com/user/GeorgiaClinic